The TST Chemrail, also known simply as the ChemRail, is a Dual Stage Linear Motor Rifle manufactured by TST and used by security forces on Elysium.

The ChemRail has a high rate of fire, and its high-velocity rounds rip right through walls and shred enemies. The rifle fires 8.75x52mm FSDRAS (Fin Stabilized, Discarding Rail Accelerator Sabot) rounds with a muzzle energy of 18 kilo joules. It is a dual-stage weapon, use chemical propellant first and then electromagnetic rails as the second stage.

The Chemrail is available in a standard black and green.

This prop item is composed of a polyester resin material. It is approximately 39 inches long and 10 inches tall. It is green in color, with a silver accessory magazine. There is a large Chemrail logo across the barrel of this item. There is also camouflage tape around the front handle, trigger handle, barrel, and shoulder rest and a black pad across the top near the back end of the gun.

The scope on the prop houses the battery for this item and can be connected to the gun through it's wiring (see photo below). There is a switch on the bottom of the magazine that turns the gun on. There is also a small button on the bottom of the gun (right in front of the front handle). Pressing this button activates a flashing white light. When turned on the trigger can be pulled and the black barrel at the end of the gun will pulse back and forth. One the front of this item there is a black wire that is currently unattached to the gun. The purpose of this wire is unknown.

The battery specifications are as follows: Battery Type: LiFe, Battery Volts: 9.9 V (3s), Battery Capacity: 3000 mAh, Charge Current: 12 A, Temperature Cut-Off: 50 degrees Celsius, Safety Timer: 60 min, Discharge Amps: 3.0 A, Discharge Volts: 3.0 V / cell. There is a charging set included, which consists of two different units: a charging power supply and a charging control unit. The battery plugs in and it appears possible to charge it using this setup. The plug on the end of the power supply unit has both AC and DC capabilities.

The prop shows signs of use from production, including intentional wear and dirt stains.[2]

Max opens fire with a Chemrail in the armory on Elysium.

Max aims his ChemRail, after escorting Frey and her daughter out of the armory.

Max holds a ChemRail rifle in a promotional still for the film.

A ChemRail rifle on display at San Diego Comic-Con. 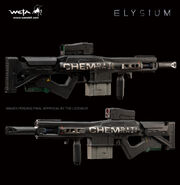 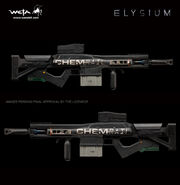 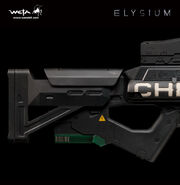 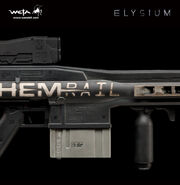 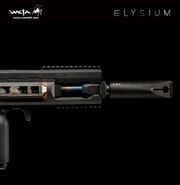 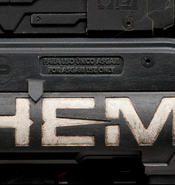 "PARA USO UNICO ASGARI FOR ASGARI USE ONLY" markings below the Chemrail's scope.

Community content is available under CC-BY-SA unless otherwise noted.
Advertisement